This year, we are just us for Thursday. And I admit, I forgot over the weekend that it was Thanksgiving. I'm tending to gloss over and forget these holidays, and I don't think it's exactly right or fair, especially to L, but with my mother no longer around, I find it difficult to jump, with both feet and eyes wide open, into emotionally heightened days. But, soldier on I will, and have several books/magazines (old copies of the now-defunct Gourmet, a demise I can't quite get my head around; but anyway) open on the floor (where else?) for ideas for Brussels sprouts, parsnips, potatoes, et al. Plus a pumpkin cheesecake pie in a gingersnap crust from Gourmet 2006 that I was going to try, but never did (until this year, that is).

I'm missing more and more our house up above the Trail (Helen, I think it is still for sale; are they getting that much nowadays? I can't believe it), even the mice and the snow in the attic. Maybe I'll waft northward, depending on where L ends up (or not; do I want to be the kind of parent who is always THERE? I think not. We had one in college who moved into her daughter's dorm room and typed her papers and did her laundry: Mumsy.)

Anyway, I've promised L to make homemade gifts this year with her: lip balm, and bath salts, and spiced nuts, and three kinds of chocolate/nut/dried fruit combinations, among other things. We'll see how far we get involved in this, but there is a local source for jars and so forth, so I can't back out for lack of packaging. 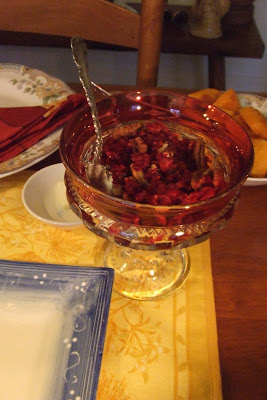 Plus, I've gotten some DVDs from the library: Outsourced, Frozen River, and Revolutionary Road (Leonardo and Kate, together again), so there's that.