A couple of my knitting projects. The purple sweater is nearing completion; I'm sewing up the underseam of the left side. Then I'll knit the collar and sew it down. Add a button, and it's done. I'm not the best seamer of knitted projects, but I'm learning.

The scarf is from Scarf Styles, the cabled one in Touch Me. There was just one ball of green, so I'll add some at both ends, trying to be fashionably asymmetrical. I actually worked down at the studio on the sweater today, and it was blissfully quiet.
Posted by tut-tut at 3:14 PM 11 comments:

Yesterday, we decided to use our pizza skills and made these two. The top one has just cheese and pepperoni, but the bottom one is loaded: kale, cheese, summer squash, broccoli, green onions, and sausage. I roasted the summer squash with a little olive oil, salt, and rosemary; blanched the broccoli for 3 and 1/2 minutes; and cooked the kale for 10 minutes, let it cool, squeezed it, and dressed it with a little oil, vinegar, and salt. D made the crust, which has a high proportion of whole wheat. Usually, pizza making is a bit of an effort, but for some reason both of these seemed to take no time. Maybe it was the early prep of the vegetables; when it came time to actually put everything in the oven, all the hard part was done. 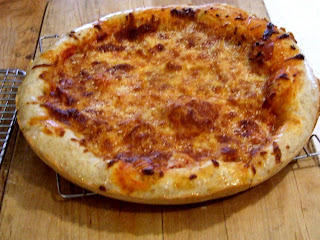 I've also heard you can do this on the grill, but I've never tried that. It does help to have a pizza stone and some pizza pans, with vents in the bottom to let the air circulate and the crust crisp, however. 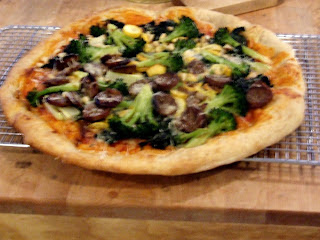 stands for Community Supported Agriculture. We are members of our very local organic farm, and received a bounty of greens: 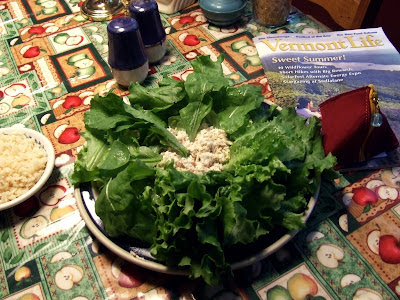 as you can see from yesterday's lunch. This is just for me, and there is A LOT of lettuce left for the remainder of the week. In addition, we received a huge amount of arugula, kale, and collard greens, as well as radishes and green onions. We are learning to like kale and collards, because, well, we have to!

I received the new Chocolate and Zucchini cookbook yesterday, or cookblook, as it arose from Clotilde Dusoulier's blog of the same name. The cover shows her reaching for a box of strawberries, and she looks charming and sweet. She writes so well, and there are unusual tweaks to some standard dishes, lots of suggestions, and wonderful photography, all produced by Clotilde. I think I'll make the Poulet Mijote a la Moutarde tonight: I'll have to pick up some red onions, though.
Posted by tut-tut at 8:13 AM 7 comments:

We all arose at 4 a.m., to get D to the ophthalmologist by 6, so he could be in cataract surgery by 8:30. When I called at 10, to find out how everything had gone, I found out he had just gone in! Apparently, his blood pressure was elevated (gee, I wonder why?), so they had to wait for it to drop, which they hastened along with the aid of a drug. The nurse gave me quite a lecture on getting him to get bp meds, etc.; I replied that all this was up to him. Hmph! she replied.

Now he's back, with a patch over one eye, but not too worse for all of it. He's got a "Patient Lens Implant Identification Card," which I guess he is to carry in his wallet. We return tomorrow to have the patch removed. I remember seeing "old people" with similar patches, and didn't realize what they were for.
Posted by tut-tut at 12:55 PM 7 comments:

I haven't really blogged about television shows. However, I've been watching Dancing with the Stars every iteration since it started here in the U.S., and this round is down to the final three: Apollo, Laila, and Joey. I've got to say, I'm with Apolo all the way, especially after his "raunchy" dance with partner Julianne Hough, who is very cute herself (almost as cute as Apolo).

The other show I watch, ever since Rosie O'Donnell has been one of the hosts, is The View, otherwise a tedious and annoying show. Now that she's announced she's leaving, however, Rosie will be sorely missed. I don't think I'll be watching it, as it's been her spontaneous, well-informed, and sometimes outrageous commentary and opinions that have kept me watching. Besides Joy Behar, the others, including most "guest hosts," have been pretty uniformly dull (and did I say annoying?). The other side to this, if you are at your computer a lot (like I am), is the video she does on her blog every morning before going on The View. She and two others, one of whom is her hairdresser (I haven't been watching this long enough to know who the other one is), answer viewer questions "on the air."

Finally, I've never, ever seen even one episode of Survivor; what does this mean about me?
Posted by tut-tut at 8:39 AM 3 comments:

Labels: Dancing with the Stars, The View

We've got a big week coming. Poor D is having the cataract on his left eye removed on Tuesday; he's absolutely frantic that he doesn't acquire some kind of sepsis while in outpatient surgery. In the meantime, it's been my duty to drop two kinds of eye drops into his eye four times a day. This brings up all the usual rants against health care in the United States, but when it is his own eye, and he writes and edits for a living, I am as worried as he is.

At the other end of the tunnel, so to say, L got her driving learner's permit Thursday. D and she have been going out daily for a slow drive around the neighborhood, and she's gotten stellar reviews as a driver. I wonder if she could get some pointers here? I haven't driven with her yet; D is much more patient, and he's already taught two or three other teenagers how to drive, so I'm out of the loop for now.

It is disconcerting to have her start to drive; wasn't it just last year I was strapping her into her car seat? It certainly seems so; it's true how quickly the years go, even as the days seem to drip by like molasses when they are toddlers. I remember wishing for just an hour for myself, and now that I've got it, I wonder what all the frustration was about.

This week Yarn Works is supposed to be getting working, so I'll have lots to do with cleaning, moving things down, and finding out if all the paperwork is in place.
Posted by tut-tut at 2:53 PM 5 comments:

I'm spending time finishing up Sarah Dunant's In the Company of the Courtesan, riveting, great writing. Now I want to read everything she's written!

Our new deck and pergola are finished, and I can't believe how much better the entire back of our house looks. I put together a pot of flowers especially to attract hummingbirds from P. Allen Smith's Container Gardens, which I got out of the library. It was very helpful to have this as a guide, as I'm more at home with perennials and herbs that with big, showy annuals. I've also got parsley, basil, cilantro, and an heirloom pepper, Fish Hot Pepper, which I've never seen before, so I hope it produces!

L is being industrious and working as a volunteer at the library; I hope she picks up a few more hours during summer vacation, which begins in two weeks. My editing project starts in at the end of next week, so we will all be busy.
Posted by tut-tut at 10:30 AM 7 comments:

Just a quick thank you to Stephanie for my great crow!
Posted by tut-tut at 2:03 PM 7 comments:

I've had a truly great week. We got our keys for our Yarn Works studio space. L was GREAT in the upper school concert. I had a wonderful Mother's Day; starting off with a Krystal egg, bacon, and cheese biscuit; proceeding to church; and just ordered myself an iteration of a pair of these, so I can finally see what I'm doing when I'm trying to sew something together.
Posted by tut-tut at 7:11 PM 11 comments:

Labels: great day all around

This is the quilt I swapped with Lynn; it was quite a challenge for me! I quilted on the machine, but hand-bound it all around. I don't know if you can see, but I added a button with an "L" up near the corner. Anyway, mission accomplished! 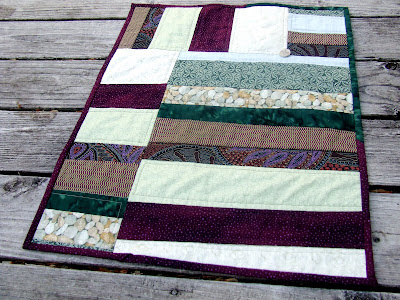 Yesterday, when I was mailing my quilt out to my swappee, I got a package from Bonnie (who doesn't have a blog, otherwise I would link there!), containing this little gem: 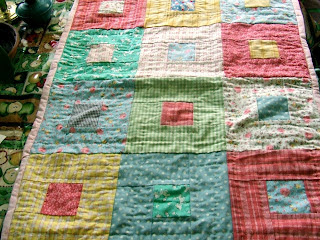 I love the fabrics she chose; and she hand-quilted the top, so it feels very 1930s/1940s authentic. Bonnie, if you could see my decorating, especially my kitchen (where everything is in vintage blue Ball jars that I can possibly put in them), you'd see that this is just my style. How did you know? I'll look for the proper place to display this quilt. Everyone I've showed it to has oohed and ahed over ti.

And if that weren't enough, inside the package was a journal, including papers, letter stickers, and other cool embellishments to decorate it with.

I've really learned quite a lot about fabric, color, sewing, my Bernina, and how generous people can be.
Posted by tut-tut at 1:09 PM 7 comments: