The Green Line from Clay Pipe Music. Other news: figuring out what to do next if the heating system is kaput. Don W is on it, with screening, some kind of glue for woodstoves, and an ancient part for this 30+-year-old Lennox system. Then he told me that he and D had hitched up a garbage can to act as some kind of venting system last year. Oy. What I don't know can fill a, well, venting garbage can. What a summer; what a year. What will I do?
Posted by tut-tut at 12:58 PM 2 comments:

to keep your mind off of everything, including, but not limited to, the dog's worrying herself over fleas she shouldn't have.
Posted by tut-tut at 10:09 AM 1 comment:

Face book is now like a crowded elevator, with everyone breathing on you, sneezing, and trying to read your copy of the New Yorker, while standing on your foot and pretending not to notice. AND: it's always going down when you want to go up.
Posted by tut-tut at 3:50 PM 2 comments:

Just a minute ago the phone rang, and on the other end was an older widow lady (not unlike me, actually, when you think about it) who offered to comfort me by reading me a Bible verse, this one from the book of Revelations. I listened to her, after being asked whether I believed in the Resurrection; to which I said yes (but don't really). But then I cried after I hung up.
Posted by tut-tut at 4:15 PM No comments:

Mad, sad, everything is wrong around here, even as we right the ship, mend the sails, look at the tidal pools. D died. that's it, really.
Posted by tut-tut at 6:16 PM 2 comments:

to watch someone who knows no joy and doesn't understand his context. Macron, on the other hand . . .

Trump and Macron react very differently when this band plays a Daft Punk medley at the Bastille Day parade. Turn your sound on for this one. pic.twitter.com/BOibX3X8tx

After episode 10 (no, I couldn't look away; I finished the damn thing), however, as the credits were rolling, the song "Jean" played. Glenn Yarbrough? Rod McKuen?

Rod McKuen, of course. I was instantly back, sitting with my mother, listening to her Rod McKuen LPs. I have Listen to the Warm somewhere around here . . .

I searched for the version that played over the credits: It wasn't gravelly Rod McKuen's voice. I had forgotten that Oliver had a hit (I had forgotten about Oliver, in fact). I think it was Oliver, but frankly the singer sounded more like Glenn Yarbrough.

I think if you order

a hot dog pizza, you deserve whatever kind of hot dogs come atop that pizza. Episode 2.
Posted by tut-tut at 7:22 PM No comments:

Pilot episode, in which Trip Advisor "reviews" are read back to a restaurant owner for his responses. I was reminded, in some way (why?), of The Trip. (Is it because it's two men in a food setting? comic aspect? Do you think of The Trip after watching this?) Anyway, nicely produced bit here.
Posted by tut-tut at 1:40 PM 1 comment:

Allan Jenkins, editor of the Observer Food Monthly, has recently published a memoir, Plot 29, about being taken into care as a foster child along with his brother, interwoven with musings on garden plot and growing. I found out about the book in a tweet, of all things, from Nina Stibbe. Now, I haven't read Plot 29, but I'm hunting down a copy. Here's a snippet from an interview at London's Honey and Co. Oh, and hello. I hope to be back, sending out snippets myself. I can't take much more of the current political goings on. It's not a very hopeful period, is it?
Posted by tut-tut at 3:31 PM No comments:

salt is February's challenge over at Food in Jars; but no meat can be involved?? Well I may try bacon anyway. I've done preserved lemons (there're some in the fridge right now), had passable success with sauerkraut, have several seasoned salts sitting around on the counter. Bacon intrigues me, though. Bruce Aidells has a recipe over at Fine Cooking,  but I think I'll use Diana Henry's version . . .

Here's my preserved lemons, an amalgam of a few versions: 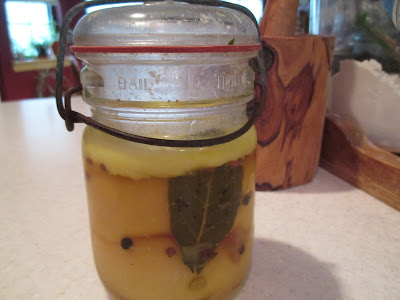 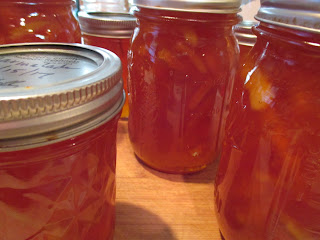 Success! Mighty tasty too. Four oranges, 1 lemon, 2 kilos of sugar: 4 half pints, 3 pints. Next time I'll cut the peel in finer strips, but it's more of an aesthetic than anything.
Posted by tut-tut at 1:22 PM No comments:

Ack; this is the first time I've made marmalade, but it didn't 'jam'. It's a soupy jar of sort-of suspended orange peel. I saw oranges labeled 'sour oranges' at the grocery store, so assumed they are those that are otherwise knows as Seville oranges and combined two with two navel oranges.

I have a problem getting jam to jam at the right consistency (usually too firm), so I underestimated the time needed for this person's recipe. It tastes great, by the way, so I will endeavor to fix this. 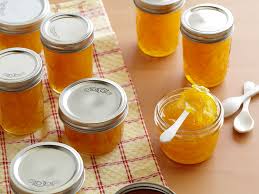 
Tomorrow the jars will be upended back into the kettle to reach 220°F and jam, damn it!
Posted by tut-tut at 4:35 PM 1 comment:

two emergency rooms! D had what seemed to be a TIA, or small brief stroke-like spell Friday evening. Saturday morning, he felt no better so we drove to the big downtown hospital's satellite, Hospital North.

The parking lot was empty when we arrived. We were the only people there. As soon as he checked in, D was whisked back into the ER.

It was like going back to another era. While I waited in the large, empty waiting room, a cop arrived with his bag lunch, and sat down behind a desk. A man with an important looking badge arrived and then left.

The ER doctor, who seemed to be Doogie Howser's age-mate, checked this and that and discovered a very low hematocrit level. D got an ambulance ride to Downtown Hospital, where he was checked in. We arrived soon after, and sat with him in his ER holding room. While there, various specialists arrived unexpectedly to ask him general questions.

He is there today, awaiting an MRI, but feeling much better. We are hoping that whatever it is can be resolved without much to do.
Posted by tut-tut at 12:17 PM 1 comment:

A lovely little piece I encountered elsewhere. I'm embarrassed that my own sewing machine sits bereft, alone, unloved. Another goal: sew some of these this year. If you have any pattern links, please share them.
Posted by tut-tut at 4:00 PM 2 comments:

well, yes a New Year, so of course I'm going to post here on a regular basis

At least I hope to. I've got prompts and plans and journaling ideas and a yoga Revolution over here with Adriene to participate in every day. Phew; so much going on, plus getting more positive, not dwelling on the negative (ha; 2017? I don't think so). Do you think I can do all this? well . . .
Posted by tut-tut at 11:22 AM 4 comments: