This dominates the horizon from anywhere, really, around here. How could I NOT take a photo, when Sally manages to make them look so alluring? This one, however, is merely intrusive. But big. Growth is good. Isn't it? 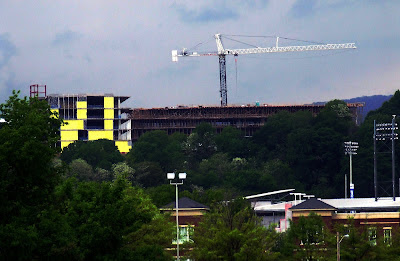 A walk, part I

I took a walk the other day; these are some of the things I saw: 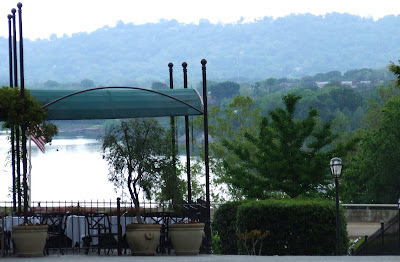 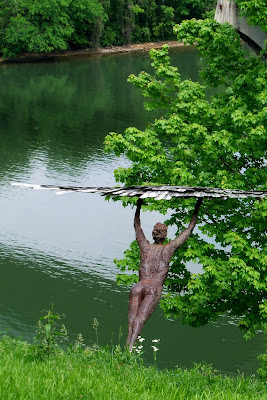 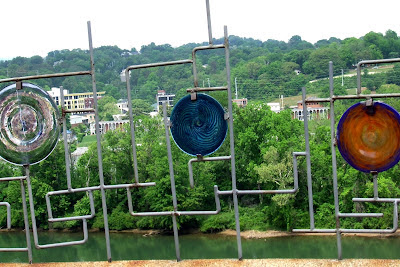 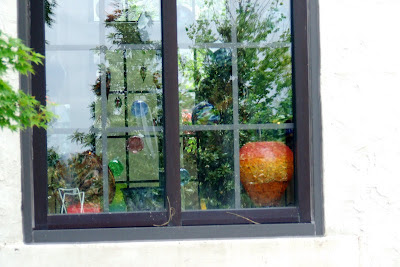 I was just thinking about my favorite TV character (besides Medium's Alison Dubois; although this series could use some help in the writing department . . . great characters, weak plots) and found this: 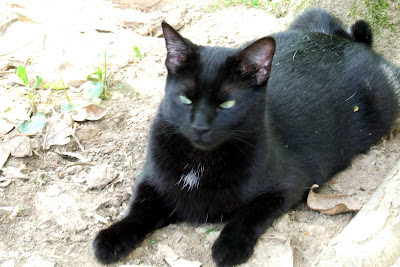 Spring in my backyard, as I try to capture it and learn more about my camera. These are everywhere; we used to call them the Money Plant, because their seedpods look like coins: 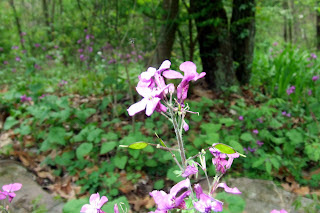 In my garden, but whose name I've forgotten: 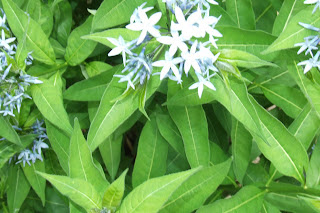 Dogwoods are in bloom throughout the woods:

Sweet woodruff, which I'm trying to get to grow all around the base of a magnolia: 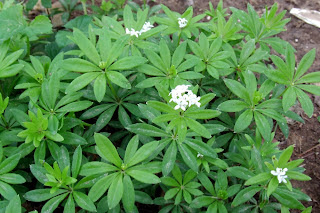 Herbs from the nursery: basil, cilantro, dill, parsley, nasturtiums, plus a sagey thing in yellow to highlight the red of the nasturtiums 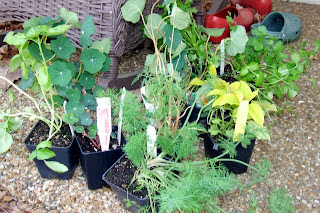 Plus, a mysterious package arrived this morning; and it smells divine . . .
Posted by tut-tut at 8:32 AM 11 comments:

This Sunday's New York Times Magazine's cover story, by Michael Pollan, is basically exhorting us to plant a vegetable garden, something D and I (mostly D) had for many years when we lived in rural New England. But now that we live in a southern neighborhood, I find that prospect a little bit perplexing, with lawn care herbicides and pesticides flowing over, across, and under our property (not to mention septic tanks within close range . . .). We have an herb garden, but this doesn't involve the root of the matter, so to say; I worry about all those chemicals . . .

We've chosen instead to be part of a CSA (I know, we have to drive to pick up our box, so there's that carbon footprint), but still I feel that we are helping to build local, independent agriculture by supporting Sequatchie Cove. I'm also reading The Revolution Will Not Be Microwaved by Sandor Katz, and that gives me lots of information on how to remain local when it comes to food. Chelsea Green is a great publisher, by the way, of many books on the politics of living a thoughtful life in the 21st century.

In an unrelated matter, I was reading Blackbird's post today, and she kind of jolted me into wanting to change it up on my blog, but I'm afraid that if I delete my turtle image, I won't be able to put in another one. Maybe I'll get L to help me, but she's been hanging out in the coffeeshop all day, ostensibly working with two other girls on an AP Government project, but with free Internet access, I think they are researching other things entirely . . .
Posted by tut-tut at 2:25 PM 13 comments:

Labels: what to do? 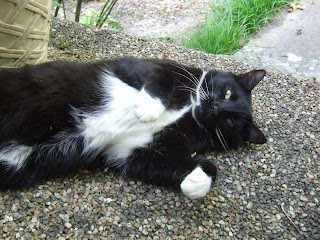 I have to link to the amazing Stephanie and her links. I am inspired to attempt to see more deeply.
Posted by tut-tut at 5:51 PM 3 comments: 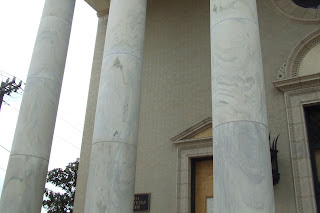 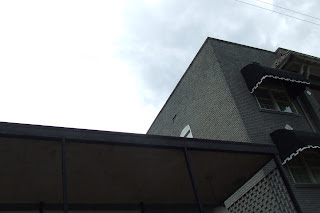 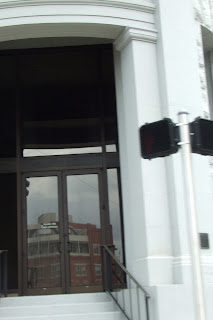 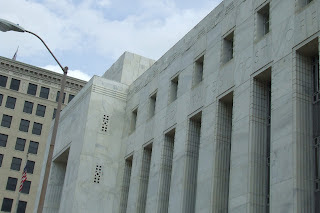 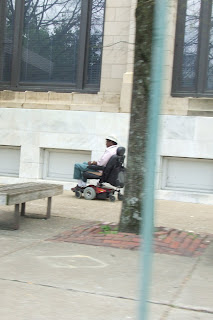 I write this not, like Cassandra Mortmain, sitting in the kitchen sink, but while listening to the shrieking of brakes and the grinding of gears. Apparently, D is teaching L to drive the car with the standard transmission. I have been banished inside the house.

This morning, I went to church, the Lone Pilgrim. L was in a bad mood, in pajamas and a sweatshirt with the hood over her head, shouting about an essay. D was in front of the television, shouting about the Sunday morning political commentary programs. I was glad I went, as the choir sang Psalm 23 during the Offertory, so the opening to the Vicar of Dibley came to mind . . . In an hour I'm going back to hear some choral Tudor anthems sung by a fairly new group.

Friday, D and I went to the Native Plant Sale: 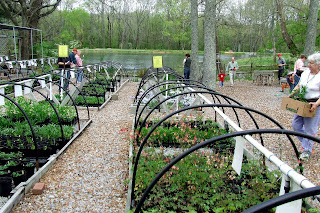 We got a few things, one of which was Dutchman's Pipe, a vine to cover the pergola and give us some shade. Another plant we spied and got was the Mountain Bush Honeysuckle (Diervilla rivularis), to replace the out-of-place rose bush in the otherwise native plant garden.

This pot was, oddly, NFS: 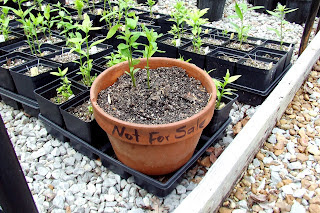 We have lots of this Blue-eyed Grass, but no Thimbleweed: 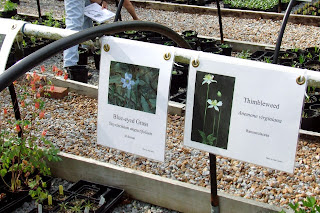 These are dried gourds that the swifts use as houses, if someone, as here, strings them up; I think every one of them was occupied. 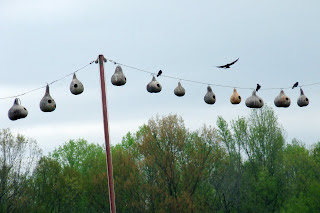 There were many turtles lurking below the surface, but only one Canada goose was in evidence. I wonder where the mate was . . . 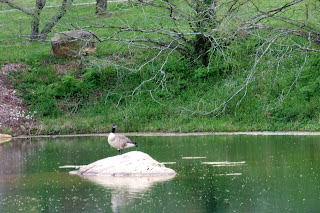 Caught on the floor this afternoon in the kitchen 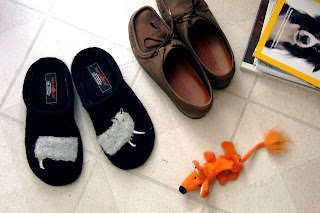 I went down to the studio to wind my warp; I have 40 more warp ends to wind, then I can dress the loom. The sky cleared and the temperature soared while I was there. Spring/summer is here, I think. 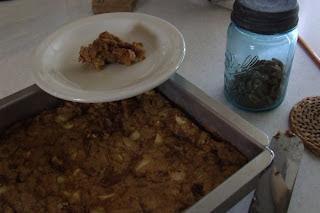 I'm off to wind a warp, then later take L to her cello lesson.

Tomorrow, with an accompanist, she plays before a judge. I'm not allowed in, so I'll be skulking around outside the door. If she scores a 1 or a 2, she apparently receives a medal. But she'll receive detailed notes about her playing from the judge, which is the most important aspect of the proceedings.