I do resolve to change certain habits, for instance, sitting hours on end in front of the computer, without getting out for a walk. This is my priority: move. Editing on the desktop isn't even as active as the old paper-pencil variety, although I can still heft the Webster's 11th one handed. Spending the better part of a morning or afternoon getting to/participating in/returning from Pilates or yoga is something else I really need to consider. Is all that time really worth it? And the money? Especially when I can practice yoga here with a bit of discipline. I'm also trying my mightiest to stick with my resolve not to buy any superfluities that I brought up on an earlier post. There is so much stuff here: books, CDs, clothes, shoes etc. etc. that should go off to the second-hand bookstore/Goodwill/wherever else to be gotten rid of. All in all, I want to lighten my load, physically around me as well as on my person.
Posted by tut-tut at 12:29 PM 6 comments:

I've got to say, I'm really enjoying getting back to reading blogs. Writing? Well, maybe, but reading a bit of what someone is really thinking about is quite a treat.
Posted by tut-tut at 6:13 PM 3 comments: 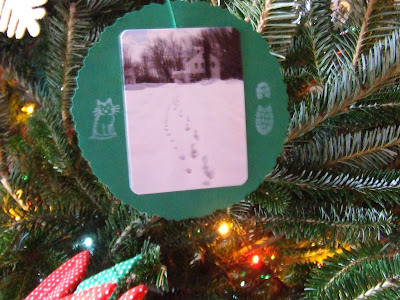 What fresh Hell is this?

Why, it's putting up the Christmas tree! yes, tree from Ace Hardware, soaking up water for a week, upon entering the house shed practically every needle it had. Also, the stand we've had forever failed to hold the tree, because its trunk is too narrow. Of course, if we had put the tree up last week, we would have known this. But D, well, you can guess that he prefers to wait until the last minute. So at the 11th hour, out goes D to Whole Foods for a natural regional tree. Good! Then, we wrestled the tree into stand. Stand does not hold because it is bent all out of shape and giant screws screw toward space between stand and tree rather than tree itself. So it was not slender trunk, but stand itself that was to blame. D, out again, gets NEW stand. Upon returning, he says he'd rather wait until "later" to put tree up. Tree is up. 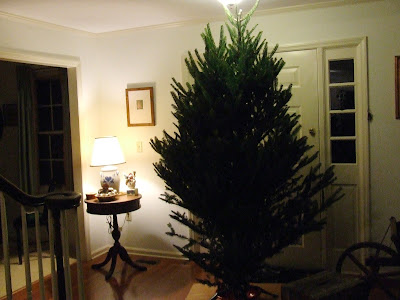 haircut today, a razor cut that G learned in NYC. My body may be in the mid-South, but my hair is Downtown. Off to Cincinnati on Saturday. Poor old Remus is consigned to the kennel for 3 nights (no snoring under the sheets for her!), but L wouldn't hear of D driving alone through the wilds of Kentucky. Not that I'm much use; I tend to panic on the highway, and end up driving at an appalling 45 mph. D knows someone who had a sales territory out West and refused to drive on a highway for similar reasons. It took days and days for her to reach her clients because she would take only secondary roads. Such is the life of a neurotic. Tomorrow the tree is going up and the lights are going on it. Then L can decorate to her heart's content when we get back.
Posted by tut-tut at 10:44 PM 1 comment:

Pulling the final (maybe) leaves out from underneath and inbetween the prickly leaves of the ugly ivy-ish plants along the garage [how did this last bit get left out?]. Whoever thought foundation plantings were a good thing?
Soul was out front in solidarity, rolling around in the dust in the driveway, acting very spry.

There is some mysterious work being done on the foreclosed house next door, vacant since 2010 . . . Still, I'd rather the weather be less fall-like and more wintery, although D is heading up to Cincinnati to rendezvous with L Saturday/Sunday. Maybe I should go; I'd rather not.

Betty C. asked if I was getting the blogging bug again. Yes, I am. FB is nice, but it's too immediate, and especially now I find myself either posting something I wish I hadn't or not posting at all. I think I like this blank page better, and visiting other blogs, though some of my regular reads will have to wake up and do some posting jumping-jacks to get back in the fray. I know it's hard to shake off the creakiness of posting one's real thoughts. I was looking around at my accumulations of, mostly, books since moving here in 1999. Really, there is no excuse for it. Amazon is like opening a vein. Argh. So, whilst vacuuming the stairs this afternoon, I had a chance to think about 2013 (not liking that 13, but ...) and I'm going to play a little game with myself. No purchases that aren't necessities in 2013. None. No books. No magazines. No mysterious lotions/potions from DHC. Nothing. And, since Everyday Food ceased publication, every time a subscription comes due, I'm not renewing. That is my thought for today, on the cusp of Christmas.
Posted by tut-tut at 3:59 PM 6 comments:

Sequentia; group founder is an Oberlin graduate.
Posted by tut-tut at 6:00 PM 2 comments:

Some Carnival Band for you. Personal to Helen: Thank you for the lovely note, and encouragement!
Posted by tut-tut at 1:10 PM 1 comment: 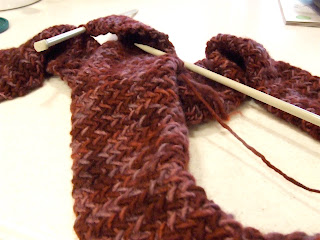 I am determined to finish this thing for L, so she can wear it this winter. However long it is on Sept. 30, is how long it will be. Right now it is as long as I am tall, which is to say 5'2''.

The pattern is one that I discovered on a 2004 Sheep in the City blog post. I'm knitting up Malabrigo worsted weight Velvet Grapes on size 11 needles. I'm into my second skein. 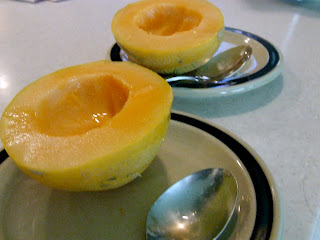 Yes, the melons themselves; finally. Very cantaloup-like in texture, though not as sweet. JGH, we got maybe eight or nine! Next year, I'm planting more. It was the right combination of intense heat and rain that really allowed these to take off. Sometimes, things work out.

Unfortunately, it was a banner year for the Mexican bean beetle, so we got very few beans.

Tomatoes also were a bit disappointing. Lots of peppers. Canned 4 pints of tomatoes, though. But still . . .

Below, you see the small plants we got last Saturday at Crabtree: kohlrabi, leeks, Bright Lights chard, cauliflower, broccoli, lettuces. I think they are still a bit small to be planted, and we're forecast to have a drencher on Monday, so maybe next weekend. I hope they don't become rabbit or deer food. 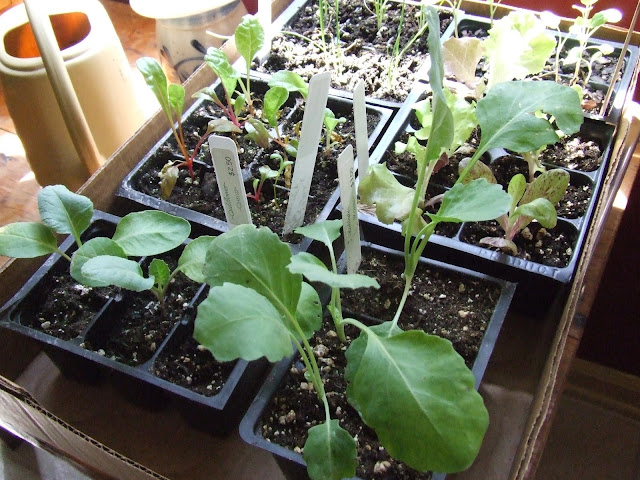 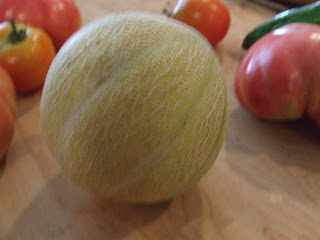 you know that rant from Mel Gibson to Joe Eszterhas? How shocking it is? How loud? How, well, crazy?

Well, when I was in high school, that kind of rant was my reality. Every. Single. Night.

I feel that this needs to be exposed, because Mel and my father can't be the only two.
Posted by tut-tut at 7:50 PM 2 comments: working through it all; I have my Owl books, which help. Who knew that reading Alan Garner's The Owl Service as a teenager would have made such an impression on me so far in the future?
Posted by tut-tut at 7:04 PM 7 comments:

Man, just saw a piece on them on Entertainment Tonight (yes, I do); forgot how much I liked them as a kid and how much an abusive father takes his toll (actually, I didn't forget about that) 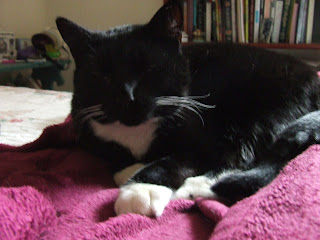 Bear (second in a series) 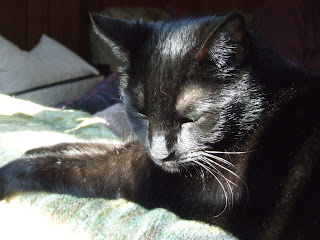 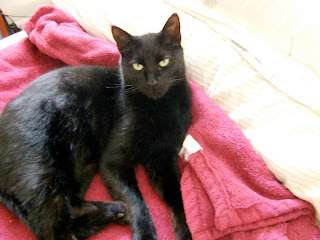 Remus and I are out for a postprandial amble.

Soul is busy in the leaves with his own ablutions.

The deer emerge and hightail it, almost silently, through the woods.

Well, after roast beef at Christmas, duck for New Year's, and various restaurant meals, I'm officially back to basics. I cannot eat another rich thing. I'm now on temple food (to take a phrase from Nigella). Well, maybe tomorrow. There are still those mince pies that cannot go to waste. I will not add the pun. I refuse.
Posted by tut-tut at 4:38 PM 7 comments:

After a year in limbo, I feel ready to get back on track. I'd rather not follow a pattern, but break out and follow the cracks I make in doing so. See you next week.
Posted by tut-tut at 7:25 PM 3 comments: