I finally opened up my ancient Harrisville 4 harness, 6 treadle loom, after keeping it closed up for several years in the "living" room, only to discover that the leather strapping harness cables had broken or snapped on two harnesses. Argh. A week of broken things. First my computer screen, then D's laptop's mother board, or whatever it was, necessitating a new monitor for me and a rejuvenated 'new' computer for him. $500+. Not good. Good news is that I can replace these loom cables pretty inexpensively, from WEBS, which was the place I learned to weave (when I lived in Agawam!! so many years ago) and WEBS was still a mom and pop business in a house on a side street in Amherst. Now (or at least the last time I was there), they are in an industrial building in Northampton, on the way to Holyoke. 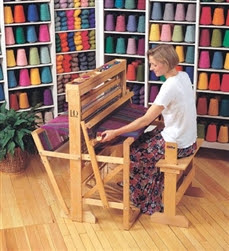 photo from Harrisville; certainly not me weaving there . . .
Posted by tut-tut at 7:07 PM No comments:

to combat the heat: an Advent piece by Byrd. Stile Antico.
Posted by tut-tut at 1:30 AM No comments:

BBC has the Tweet of the Day, so I thought I'd send it along.
Posted by tut-tut at 7:12 PM No comments:

About every 6 or 8 months I swoop back into Twitter, but I just can't seem to get the point of it. So many bon mots, so little time (at least on this end). To what end, all this thumb movement on expensive iPhones, Androids, and similar? I don't need to follow a celebrity's peevish rants. I don't have such computer capabilities on my phone. Since I work at home on a desktop, I don't require it, really. When I need directions, I consult a map, install a navigator in the shotgun seat, visit MapQuest, or, simply, call ahead for directions. So no GPS (the guidance system, not the school) for me. Saturday, I was sitting in front of my screen, working away, when suddenly all went black. D consulted Apple, and the technician suggested switching the cable connection on the computer. This solved the problem for half an hour, but then darkness fell again. D went out to WalMart (closest!) for a replacement cable; that didn't do it, so out further afield to test old cable. Turned out to be the monitor, so poorer by about $160.00, but reconnected to my Word files and the wider Internet world. Odd how not too long ago (in the general scheme of things) the computer was a complete mystery, clacking keys and difficult-to-learn almost programing to input anything. I'm on an Elisabeth Luard kick: Sacred Food; Classic French Cooking; etc. Also trying (again) to create a sourdough starter using a recipe in Diana Henry's Gastropub cookbook (the second one) but I'm not hopeful.
Posted by tut-tut at 3:59 PM 2 comments:

I picked Joan Wyndham's Love Lessons: A Wartime Diary off the shelf and started to read. This is her diary of being a student-ish person in wartime London. A very fresh voice from so long ago. I recommend searching out a copy. Then a FB friend pointed out that Rumer Godden's books are being republished by Virago. Greengage Summer, Kingfishers Catch Fire . . . Which made me remember Persephone Books, a great (re)publisher of forgotten or underappreciated women writers/books. Great cover/interior designs. I saw Few Eggs and No Oranges, another wartime diary, which I will save to buy. Persephone also publishes Etty Hillesum's wartime diaries. I recommend reading what she had to say. Glasses frames need major adjustment, in case you're wondering. Will be dropping in there tomorrow.
Posted by tut-tut at 4:06 PM 1 comment:

Finally picked up my glasses today; had been putting if off because of the expense. Infuriatingly, they still need an adjustment. Eye guy blaming my cataract. Hmmm. I read in an afternoon Thea Goodman's The Sunshine When She's Gone. I liked it enough (so much?) that I went to her website, where she lists some books she especially likes. So I got A.M. Homes's May We Be Forgiven, which is so quirky and well written that I went to HER website and found this little link of her talking about writing: Now I am going on an A.M. Homes marathon, I think.
Posted by tut-tut at 3:45 PM 1 comment: