Yesterday, we had a great time in the shop, hosting an all day nuno felting workshop that Geri led. First we felted a little iconic woman to fashion into a pin. In the afternoon, we each made a scarf using a silk base and then felting fibers to it. It was great to get down to work, and having the entire day laid out for me with nothing else to concentrate on but the materials themselves. It's been a while (the entire summer, in fact . . . I wonder why??) that I've had a chance to concentrate fully on something like this.

Here are two photos of my efforts, and I do mean effort. Felting is hard work; there is lots of rolling the silk and batting back and forth (rolled up around a stick and soaking wet) to get the fibers to adhere to each other. After that, you dunk the whole works into boiling hot water, squeeze, and throw the wadded up material against the table a few times. I'm not sure whether you can get the full effect in these photos, because I'm actually quite pleased with this first effort. The pin's "face" is a rusty bottle cap that Geri had punched a hole in, and I put on a few beads for gender identity . . . though the little round one needs to be removed. I have no idea why I put it there. 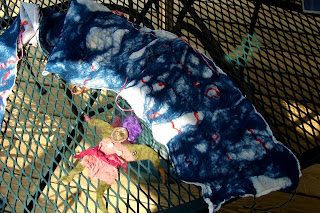 This fall, I'm hoping to spend a lot more time on my loom, and working out some embroidery designs based on some abstract images from some photographic images I've been looking at.

Tomorrow school starts, and a new editing project is being delivered to me, so I'm hoping this is a productive and creative one for us all, near and far.
Posted by tut-tut at 11:45 AM

Labels: getting down to business

Just saying hello and go again!
We have now nice summer weather here and I will hurry again to the summer place after one night in the town.
Water of "our" lake is still warm enough to swim, but it will become very chilly after week or two.
I wish you pleasant time at home and work!

Sounds like you had a fun and productive day. When you're busy, any time that you get to yourself is always so much sweeter...

I love the rich, deep colours in your work.

i enjoyed your post about your daughter's first evening meal. how old is she?

Love the felted person, v quirky and orginal, must have been great fun to make.

thanks for stopping by! being able to knit is on my 'wish-i-could-do-it' list.....

my uncrafty self admires those little felt people.

Really neat! I've never worked with that before.

Oh, these are quite beautiful...very nice!

You are so creative, and I'm green with envy that you had a 'free day.' I bet that recharged the batteries.
Best wishes

G'day.
A whole day to be so creative. These are precious times, aren't they.

I love your little felted doll! I've done a small amount of felting. Must do more. Must, must.

I'm totally uncrafty as well but I like looking at the creative works of others, such as yours.