so very hot out, that I've taken shelter in the kitchen, in which I'm making something called on Onion Confit Quiche, plus roasting beets for a beet, walnut, and chevre (or, failing that, bleu cheese) salad with shallot vinaigrette. From this rather nice cookbook (borrowed from our great little library here): 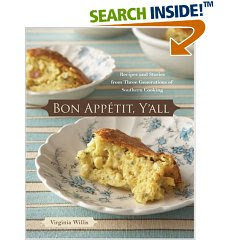 I did not make it out to knitting, though I did appear at church to perform my altar guild duties; the sexton was there, nattering away while I attempted to follow the combination to open the safe. My partner was busy doing all the tedious things, such as setting the hymn boards and removing the spent votives. I cranked down the presence light, but she had already done so, so I heard a kind of glassy, tinkly, whoops! sound as it wound to meet the floor. Luckily, no breakage.

Almost but not quite finished with my more interesting editing, but another job has appeared, and so I will go to it with a heavy heart . . .

But at the end of the month, we're going to bring L to here pre-college program, lurking just across the river in case, well, just in case . . .
Posted by tut-tut at 3:31 PM

Oh, your meal sounds so very French! I could do with some heat now...our spring has been dull and grey. Enjoy your meal!

Hello Beth!
Tou have hot, we have this morning cloudy and 50 F (10C ) and windy.
Very good to make beds ready for four grandchildren who are coming next Wednesday by train and by themselves. They are 12, 11, 9 and 9 years old.
In the train is a section for four,where they are in safe and can read and play with their Nintendo. .
almost four hours from the town Lahti to Joensuu.
You could come and make some your delicious meals, you can believe, they eat much with a good appetite :)
Have a happy Sunday!

If I wasn't still a full as a balloon from brunch I might just feel a bit peckish reading that. So few people appreciate the full yumminess of beets and blue cheese.

Glad that the distance will be manageable, that always makes for a [slightly] easier time on the brain ache.
Cheers

p.s. knitting is going great this end and I've just found a pattern for knitting a sweater / cardi from the neck down - I can hardly wait to start it but I'm saving it for the trip back home to England.
Cheers

i'm the only one in our house who likes beetroot - but i do love them. It sounds like a delicious meal.

sorry the work in view is heavy :o(

What a lot of prep. though. Or maybe not, since the skin will peel off more easily.

Let me just add that I have done those kind of edits (I assume you mean that when you open it all up your heart drops . . .)

Awful, awful feeling - albeit not quite so bad when you get started - so I am sending you through a WARM HUG.

yum! I'm going to check and see if the library has this book.

I do believe I'm going to duplicate your menu.

I have a family of beet lovers - most fortunate!!

last night I made asparagus soup - it was beastly hot in the kitchen but the end product made the sweat worth it.... I'm not fond of a/c the only place in the house with an a/c is the third floor studio and it only goes on in emergency! like yesterday when we had a record breaking day. today, a front came in and we're back to more normal temps. thank goodness!

Dennis likes food. Dennis has a new basket to sleep in.
In the kitchen, close to the food.

The salad sounds inspired. I'd never thought to eat beetroot with cheese. My tastebuds are hopping but it's not even 11am..

Good luck with the editing..sounds like all the drudgery of correcting schoolwork without the satisfaction of teaching beforehand..
Angela

I'm so psyched our library system has many copies of this cookbook - although most are currently checked out, including the one at the branch closest to my house. but I have it on hold and expect one to be available for consumption in days!

Kimy: Libraries are the greatest! I love our new librarian in our town; she is really getting in the groove, and we have a whole new "Green" section.

Sadly, the county library system has been underfunded for years, as our county commissioners are anti-intellectual troglodytes.

hot still? it dropped way down to 87 here.

I'd have to say, things are looking up. Your Jeff Bridges doll had me in stitches, as they say . . .