A few days ago, while reposing on this very table, Frank revealed an ugly truth about himself. 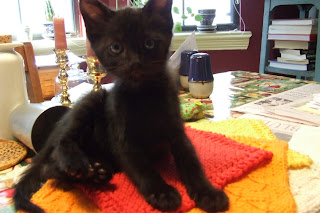 Or rather about his person. To be brief, Frank has brought along some baggage in the form of several fleas. The vet sold us something I'm not crazy about using, because these are some very harsh chemicals, but we put, as instructed, two drops on his skin at the back of his neck. He looks a bit chastened here.

The two other cats have received a similar treatment.

Many years ago, several states away now, we lived through a flea infestation. Not pleasant. Not at all. And difficult to deal with, let me tell you. It's better to nip this particular parasite in the bud sooner rather than later . . .

Other than that, though, Frank has adjusted without the bat of an eye. Bear is still in the throes of heartbreak, but is getting better. She can now stand to be in the same room with Frank, sort of, for a minute or so. Throughout the day, Frank enjoys many feedings of Fancy Feast, with a little milk in a bowl. He plays with some toy mice and enjoys a handknit or two to bite one when feeling frisky.
Posted by tut-tut at 8:13 AM

Cute kitty. We had fleas once, but we were the type of family that just lived with them.

we've had lots of the human head-dwellers

but cat fleas - not since long since...

more pics. of frank please, i can't see too many.
is he totally black all over?

Oh dear. Uninvited guests. Let's hope they pack their bags and leave on the next bus out of town.

I had a dog and cat combo who did the same thing to my house. Most annoying.

We bought a house once infested with fleas. When the fleas' old hosts, the previous cats, were gone, we became the hosts. Def a problem worth nipping in the bud.

oh I'm sorry you are having to deal with the dreaded fleas. knock on wood, it has been years since we have had to face that pestilence!

I do remember (fondly?) many hours scouring the cats and finding fleas on them and killing them between my fingernails thinking 'take that!"

Frank is SO adorable! what a great face! How could any human not love him totally? Darling face (nostrils lips)

Frank reminds me of Eddy when E. was teensy. I balked at the idea of using Frontline, but we'd occasionally find a flea in an armpit, so we tried it and it's worked well. Frank is SO adorable.

Eddy is growing up and I really don't mind because the older ones are dolls too. But enjoy the fuzzy months!

I just read Joanne's comment --I moved into a pristine looking rental space when i was in college, had to flee the fleas and get the place sprayed, repeatedly. very toxic situation, too.

OK. So now we know you've been dealing with fleas. I love the photo you've posted on Frank.

I'm such a cat lover. I hope you write more about how you and Frank are venturing off together, fleas and all!

Been there once w/ the flea thing... moved into a place that was infested. ick. At least you can control them.

We used to get terrible flea infestations when we had dogs in Florida. I don't miss those days at all! (My cat, fortunately, has been flea-free for years.)

Cats and fleas seem to go hand in hand. I'm not to keen on those chemicals either but having tried all sorts of methods I've found the only one that actually works is called Frontline in the UK.

Just look at is little face his (or she is) beautiful...

Best way to deal with fleas, in my experience, is the injection from the vet that renders the fleas sterile. This breaks the breeding cycle and any that hop onto the critter will find their family-size reduced to 0

I HATE pesticides of any type

Fleas...why did it have to be fleas?
Sadie has a few little travelers too...ugh.

Meh - my 2 cats have the deaded fleas too and I have just bought some Frontline. They don't seem to find me at all tasty - but hubby comes out in a nasty rash when he's bitten & they make Charlie & Coco itchy & scratchy. So, pesticides it is!