lately, they've been very vivid, almost Technicolor, in fact. Usually I dream that it is night, a vast dark world without color.

But twice I've dreamt of the most perfect house, cool, large, old. Many rooms, a big garden. A built-in television from the 1950s, with a metal tag identifying the maker. I can't make out the words. Wide windowsills outdoors, concrete. Outside it is cool, a bit overcast. There is a room set up as a nursery, left from the previous owners. I leave it that way, though there aren't any babies, and I don't need a child's room. Maybe this house was built in the 1920s? I feel so at home in it.

Last night I was dreaming of my mother and another house, or rather an old storefront such as you might see in Vermont. All of a sudden a flock of white owls swept around me, settled into a tree, and watched me coolly. They had round, blue eyes. They weren't large, like a Snowy Owl. More the size of a Saw-Whet Owl

The hoot of an owl in a dream is ominous, but owls seem to symbolize wisdom and virtue. Are changes on the way? I'd like to know if the house dream and the owls are connected. 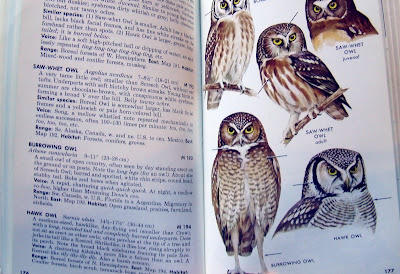 Oh, I forgot. Check out dreammoods dot com. I go to the dream dictionary first and then think about what the elements of the dream mean to me (calling Dr. Frued!)

Owls always bring news of change, the end of one thing and beginning of another. They also help turn disadvantages into advantages since they can see in the dark.

These dreams feel very powerful to me, just reading about them. Are there changes in the air?

Do you think your dreams are in some way referring to the ten years you've spent in the south?

It seems to be a very nice dream.I'm sure it means something good to happen.Owls are good omen I think.I love them very much.I've read somewhere that the house was the self but then I don't know.
Have a nice day
:)

If Reya is right, a flock of owls must mean a very big change! I also often have dreams of finding an ideal home. I wonder what that symbolizes...

hmmmmm....the dreamworld is such an interesting place.... I sleep to dream......

I love dreaming & dream a lot. I think you may be flying north.

maybe you are to fly north and nest there.

I'm always envious of people who remember their dreams. I seldom do. It makes me wonder if I actually dream or not.

Ooh, It's a rainy Saturday arvo here and you have me Googling (nothing but sport on telly) Theowl usually represents wisdom and virtue, and your unconscious may be giving you important massages, so pay attention to the details in the dream. Then . . .To see your mother in your dream, represents the nurturing aspect of your own character. Mothers offer shelter, comfort, life, guidance and protection. Then . . .The house is a psychological extension of our identity and physical being in the world.
So work that one out! I dream about dropping babies.

I like the idea of that house.. and I believe owls are a great omen. I love the looks of a Saw-Whet Owl. Very different to ours here!

I remember once telling a friend about a dream that I had. It was so vivid and I had no idea what it was that my subconscious was trying to work out. My friend said that the answer was obvious and reminded me of a significant event that had recently happened to me. It was so transparent once she mentioned it that I could not believe I had missed that. Felt sort of stupid and don't often share my dreams anymore.

Hullo Tuts,
I do love dreams.
Do you keep a dream journal?
Vivid dreams have a way of following you around throughout the day, right?
The house dream is very familiar to me...have been dreaming of big old houses for years, and I have done a lot of research interpreting this image.
Never have dreamt of owls, though.
Thanks for the share.
PS
Love tweeting with you.
Sometimes you are the voice of reason when it gets crazy in Tweetsville.
LOL

Sounds like quite a vivid dream and very interesting about the owls and the nursery. I wonder why you felt you had to leave it be? Fascinating!

I have very vivid dreams but you know, I just realized, I hardly ever dream about animals?

fascinating
it sounds like a reassuring sort of dream

and its so strange when you have the same dream more than once isn't it?

i'd like to know which of these comments you find most illuminating
:-)

What lovely dreams you have. I seldom remember mine and when I do they are too weird to describe and make no sense at all.