we decided to go and see the Sandhill cranes (I'm not sure what subspecies these were), migrating to Florida and north Georgia. Last year, over 15,000 of them stopped over. We were kept back quite far from the birds, who spend several days in a sheltered area on the river; it was difficult to see them. 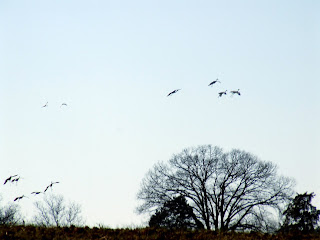 Luckily, in a farmer's field right next to the road, a lot of them were feeding on the hay seeds. We scrambled up a steep bank to get this picture (along with many other birdwatchers). Watching them land, with their feet outstretched, dangling beneath them, I felt a catch at how vulnerable they are. And indeed the entire group of whooping cranes (actually 14 of 15) that had accompanied the sandhills died in the tornadoes in Florida last week. That represents the whole population born this year, I believe. (Speaking of weird weather patterns, anyone seen An Inconvenient Truth? we watched half of it in Sunday school; one of the group was in tears, and the rest not far from it. We'll watch the second half next week.) 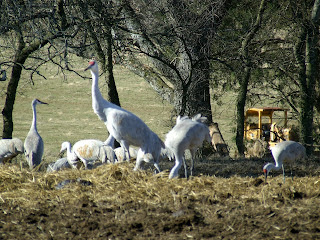 After watching them for I'd say 15 minutes, we were interrupted by the "chirp" of a patrol car, and the officer advised us to "move your ve-hick-als" so we scrambled back down, and away.
Posted by tut-tut at 1:24 PM

Gosh they are beautiful!

They're really beautiful and how sad to hear that the whooping cranes were killed in the bad weather.
You were so lucky to be able to see them.
Angela

I love these cranes. I used to live on the Platte river in Nebraska, and the sandhill cranes would fly through every year.

How cool. I was at my parents in Oklahoma last weekend and they were spotting a robin... spring is coming.

I think that 17 died and one survived. Sad but it is worth caryr on the experiment to get a second flock going.

My parent's ranch is close to a wild life refuge. Often in the fall we would see birds in our fields. Ad more and more population and house developments occur, there are less and less places for the birds to land, eat and rest.
AN inconvient truth it is.

How wonderful to see those large birdsand share the photos...I had never paid attention to them before!

This is a wonderful post, tut-tut!
These birds are special, so big and beautiful.
If your birds are Grus canadensis,
we have Grus grus.
We see every spring them here, when they come and nest and in autumn again leave us.

Have a nice time!

What a sight, beautiful.

I'm too cowardly to watch An Inconvenient Truth, what I already know about the environmental situation is bad enough, I don't know that I could cope it.

Aren't they just the gawkeyest birds? But beautiful when they are in flight!

isn't it wonderful that such birds can be protected now. Also, that so many people are in awe of their beauty and make an effort to see them?