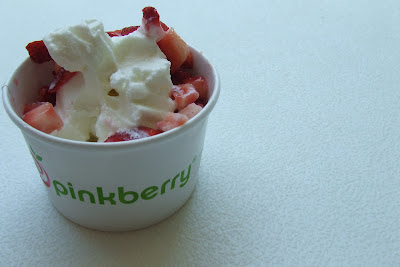 I never make any fuss over birthdays; I suppose I should. I wonder why this is. . . . L would like more of a to-do, I know. However, if she could, she would have a Pinkberry on her birthday, as she found an emporium convenient to her campus last week, and I think had 3 Pinkberrys during her stay. Here is a photo she took of one of them, while I was there, so she can gaze upon it whenever she feels lonely for one. Apparently, Pinkberry exists only in New York and California.

My birthdays are unremarked and unremarkable, except for my 39th, because we ate at a fast-food place outside of Atlanta, Chick-fil-A, which gave us the option of being waited on or going to the counter to order. We had never heard of this place before, coming as we did from Up North. They are all around us now, though never with the waited-on option.
Posted by tut-tut at 9:39 AM

Dennis has fond memories of discovering Chik-Fil-A in the South.

Dennis has not had a pinkberry yet but listened to an NPR podcast about them once.

Pinkberry! How hip and trendy L is! I hear it only comes in weird flavors, like seaweed or something.

Pinkberry comes in plain, coffee, or green tea. L has sampled them all, and coffee is the favorite. There are lots of fresh toppings to be added. As an extra bonus, they put a little printout on your cup, which includes your name, so you really can't mix things up if your party is a large one. No squabbling at Pinkberry; tables are small . . .

Happy Birthday! I must admit to liking a fuss made and get very irritable if I have to make my own cake..H. is more like you.
I don't know Pinkberry but it does look delicious.

I could have written that first sentence and simply substituted 'e' for 'l'!!

never heard of pinkberry but I love ice cream and it sounds delish - green tea ice cream sounds dreamy to me! next time I'm in nyc I'll have to hunt it out!

many years ago I ate at a chick-fil-a when I was on a business trip. I liked whatever I had. I've noticed they have them around here, however, except for bagels (or an occasional tuna sub from subway)I'm not really a fast food nation kind of gal.

I really like l's photo of her dish of pinkberry - it's excellently composed!!

What's pinkberry? I've never heard of it, though it looks a bit like chopped up strawberry.

Pinkberry is some kind of superdedouper frozen yoghurt that is quite "in" apparently.

Yes that is chopped up strawberries on top.

You can get all kinds of Italian-designed gadgets there, too, for some reason.

In my family, all four of us were born between June 14 and June 30, with guess who in last place? Needless to say, my birthday is seldom noticed. Sniff.

I like birthdays if for no other reason than the cake and ice cream.

today was your birthday? we're both cancers? i make the biggest drama about my birthday - i feel that everyday should be all about me but on my birthday i am justified! i think i may stop adding years to my age this year, however, and just enjoy the attention from now on. and i'm putting your b-day on my calendar for next year.

I think I make no fuss re: my birthday because as a kid all I remember from my birthdays was wearing an uncomfortable dressy dress and being surrounded by kids and adults, much HOOPLA and all I wanted was to change clothes and go for a walk. I can't recall one party from the other--they all seem the same-My older sister hovering, petting me, telling me to smile, asking me if I was having fun, (she planned the parties)

Steve did a whole post on Pinkberry at Shadows and Light --it's worth searching out.

when is your birthday?

The theme is birthdays; it is not MY birthday, which occurs in April, not too many days past federal tax day, and often occurs on Patriots Day, a holiday in Massachusetts on which the Boston Marathon is run.

I don't think Pinkberry has crossed the Atlantic yet. I'm not too good at birthdays although I suppose compared to many I make quite a fuss. In fact the kid next door has opted to spend his birthday round here today so I'm off to decorate a hastily purchased cake for him. It'll be all frosting and marshmallow.

thank goodness...I thought you just had a birthday....I too, am not much of a celebrator of birthdays either...I do remember the big three...my husband's, mother and father, but otherwise, I am not one of those people that has a drawer dedicated to Birthday cards...