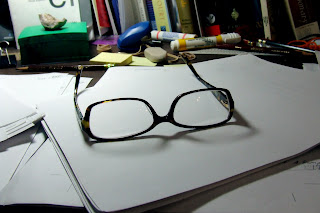 I'm always amazed at how much power those eyeglass ladies have. I bought a pair a few years ago which were perfect for my FACE but not for my personality.

You'll probably find the graduated lenses useful for your knitting. I have them but I rarely wear them in the house. I prefer the world in soft focus...my sister had hers laser corrected. I hate the specs but just couldn't risk my sight.
Some people can be difficult; could you not change your doctor?

I've never been to an optometrist, but the way you describe yours reminds me of the orthodontists I've been to. The fact that I haven't had my teeth fixed yet seems to make them a little sick.

Now that you have your RX, couldn't you "shop" at Eye Masters, Lens Crafters, or one of those other chain stores? Isn't it maddening to pay someone with a bad attitude and NO customer service skills? yuck.

Gosh I'd love to see you wearing both pairs!

I have bifocals and I've nearly fallen several times. It really takes some adjustment. Anyway, maybe you could find another place where you aren't intimidated-but it makes an interesting story.

I search high and low for just the right optometrist because I have to be able to see.

Just hate officious crap coming from anyone who is taking my money. Hope your glasses are re-adjusted without the rudeness. It's so unnecessary!!

I have visited optometrists with friends, a lengthy process where (different optometrists) they all had this attitude that only they could choose the frames for the person. It was a little weird how they hurried the person along, too while appearing to be slow and careful and caring about the choice. It seemed odd to me, that my friend tried on a grand total of 4 frames (all chosen by the optometrist) and was told which one "worked" I thought it all happened too quickly. I didn't accompany anyone for adjustments. When I have to wear glasses full time, I hope I have enough money to get four pairs for various moods. But I doubt it. I just know one of my moods is nerd and one is crazy. These moods will require different frames.

I love your green frames.

Great frames, you'll be stylin'! And I'd keep getting the adjustments regardless of the attitude. Sometimes if you lay on the kindness the attitude kind of backfires?

I need reading glasses. I have been holding out for no good reason except that I have always had perfect vision and resent having that changing on me. Guess in my mid-forties, I should let that go, huh?

Sounds like the glasses lady needs to adjust herself. Good luck with the new frames.

I've had reading glasses for many, many years now but a few months ago found my eye sight waning and have now varifocal. Like you, when you had your first pair, I was amazed to see THAT many cobwebs in my house.

I love that green color! My dad is my optometrist so I'm never shy about demanding adjustments.

I've had my new glasses adjusted twice now. The second time the lady at the front desk gave a loud sigh.

She is what your daughter might call an utter douchebag.