With much trepidation, I started out from far below the Mason-Dixon line to venture forth with L. Since her school wouldn't allow her to take Tuesday off before Winterim officially began, we got as far as Cincinnati the first night. Which was OK. We had a lovely time, especially as L was able to see all the excitement on cable tv she misses around here. We had to downsize, not because of L, but D couldn't not leave MSNBC, CNN, etc. alone for 5 seconds. 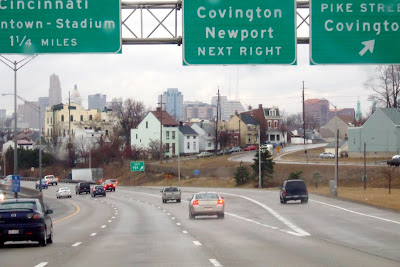 The next day we drove up to Gambier to see Kenyon College. We stayed at the lovely Gambier House, just across the way. We were surprised to learn that the area around Kenyon has the largest concentration of Amish in the country. L got the photo below on our way to getting lost. Luckily, a car was stopped in the middle of a back road; the driver and his wife had just spotted two eagles. When we asked him where Kenyon was, he said, "Heck, I'm not doing anything. Follow me!" so we did. 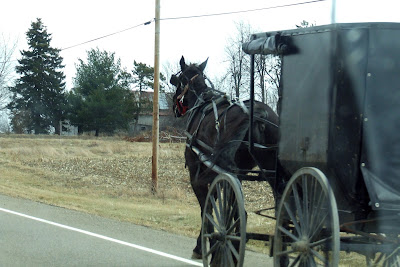 It was unseasonably warm during this visit. L was the only tourer, so she went out without me with her student guide.

Here is Kenyon's admissions building, John Crowe Ransom being honored with the statues of crows on top. Until I scanned the link, I had not realized that Ransom was himself a Tennessee native. 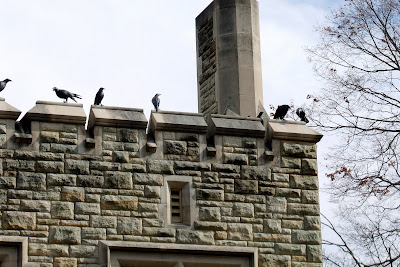 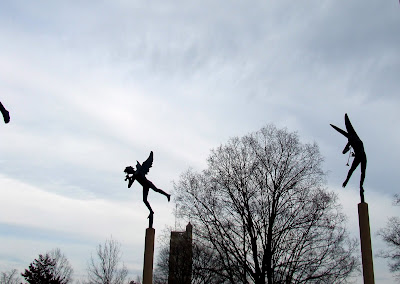 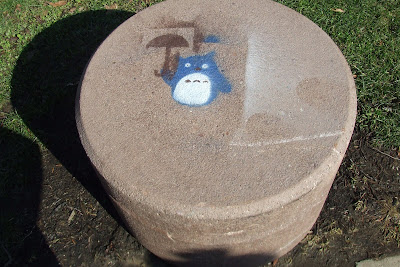 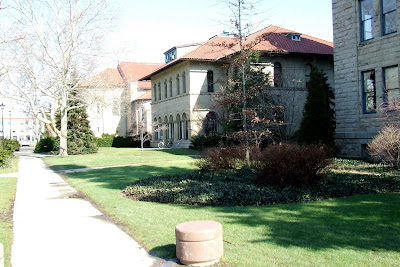 Oberlin was the best, and not just because I got to stay with Kim of Mouse Medicine two nights, one while L was staying at Oberlin and the other with L. Kim did it all: drove us around, went on a very cold tour of Case Western, taking pictures all the while, made dinner, gave a tour of Cleveland, stopping at a candy store in Cleveland Heights, in the midst of pre–Valentine's Day mayhem; Gallucci's ("Your Italian Grocer Since 1912"); as well as the amazing West Side Market. I got to meet lovely Em and F, and all the cats (except one). Our trip would not have been anywhere near as fun, informative, and vibrant without Kim! 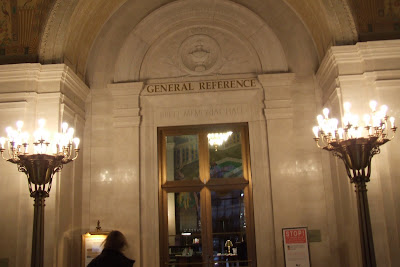 The view from the Children's Department; this visit was also my first viewing of a Great Lake. Erie is at the horizon. 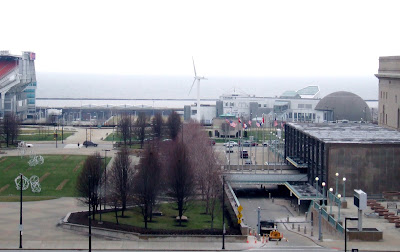 The Mouse's most comfortable futon; two regulars stake their claim: 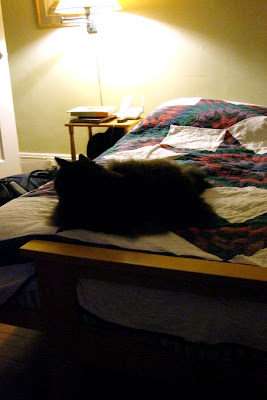 On the morning we left, we were greeted by: 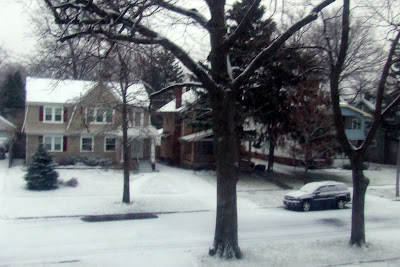 But we made it away without incident to our final destination, Earlham College.

This was a great tour, the first one that we saw several colleges, so could compare them on site, so to say. Plus I've got to say it was a great mother/daughter trip; I couldn't have done it without L's navigational skills .
Posted by tut-tut at 2:22 PM

Thanks for sharing the photos, links and your wonderful experience!

L has a lot to think about and choose from. Has she given you any clue which way she's leaning?

Have a good week!

That sounds like a fabulous mother/daughter trip. I'm not entirely sure how you choose colleges in the States but I like the idea of a road trip!

Dennis says Oberlin gets points for the owl art but the other college trumps the owl with its Angels.

I wish I had a mother or a daughter.

I vote for Oberlin, liberal lefty that I am. Looks like a great trip!

That's very cool. My son has started geting college recruitin letters, and we'll need to do some visiting next year. Ack.

Looks like a fun road trip. Did you have a preference for L? What does she want to study?

Sounds like a lot of fun. Takes me back a few years. I can't wait to find out which school L decides to attend!

Thanks for sharing those! L is going to have a tough choice, it looks like. I too am wondering if she is leaning toward one or another?

Thanks for the tour. Travelling is always fun. I hope your daughter doesn't find her choice too difficult :)

tut-tut, great way to share your experience, here. And the way it's set up. No pics of "crossing the border" or standing by state signs( one of my Aunt's favourite things to do ). You out the reader there! I'll be covering so much territory when I go out west...

Hey, you were up in my neck of the woods! I live in the Columbus area. My youngest is in his fourth year at Bowling Green. I've heard very good things about Oberlin.

How exciting - and unnerving - that L is touring colleges.

Angels on campus is always a good idea. Can't wait to see Music Monday which I hope will feature some of the music you listened to as you drove around Ohio.

I enjoyed this post. My parents are from Sandusky and I've spent lots of time in northern Ohio. (In fact legend has it that my ancestors were the first settlers in Huron county!) I've never visited colleges there, though, so this was fun!

I remember those days of looking at colleges. All of our children ended up in Texas but I wanted to go to Duke myself.

great write up of course I'm hoping l chooses oberlin ....and if so who knows what other gifts of migration might come as a result!!!

the crow statues are pretty cool - and of course as are the angels.... always good to have angel energy!

perhaps you'll feel the need (or desire) to make a second visit ....if so, you can be assured there is a futon awaiting....not to mention stella the cat you didn't meet nor did you meet notch! mouse's mouse!

The college tours sound fun, I wonder what she'll choose.

I loved reading your post - brought back happy memories of visiting colleges with our two.
Beautiful quilt on that futon. Beautiful cats, too.