Many years ago, when L was just a tot, a friend and neighbor would open her house for a pysanky egg decorating party. She had many sets of the styluses, beeswax, and various dye baths set all over her house and any and all were engrossed in making something lovely.

We were in New England, and it would still be wet and cold, often snow likely. And it was fun to catch up with others we hadn't seen all winter.

While rummaging around for some of the eggs we made (yes, of course I keep everything) I found this little Easter craft book and, lo and behold, a psyanky kit, never used, mint in box, as they say. 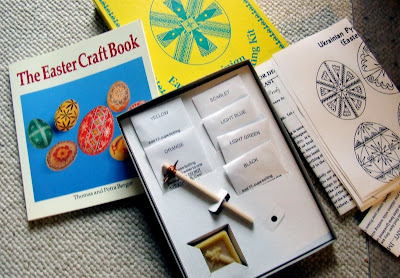 Finally, a poem, from a different angle:

On Easter morning all over America
the peasants are frying potatoes in bacon grease.

We're not supposed to have "peasants"
but there are tens of millions of them
frying potatoes on Easter morning,
cheap and delicious with catsup.

If Jesus were here this morning he might
be eating fried potatoes with my friend
who has a '51 Dodge and a '72 Pontiac.

When his kids ask why they don't have
a new car he says, "these cars were new once
and now they are experienced."

He can fix anything and when rich folks
call to get a toilet repaired he pauses
extra hours so that they can further
learn what we're made of.

I told him that in Mexico the poor say
that when there's lightning the rich
think that God is taking their picture.
He laughed.

Like peasants everywhere in the history
of the world ours can't figure out why
they're getting poorer. Their sons join
the army to get work being shot at.

Your ideals are invisible clouds
so try not to suffocate the poor,
the peasants, with your sympathies.
They know that you're staring at them.
Posted by tut-tut at 1:37 AM

Since we own something close to a '51 Dodge and a '72 Ponti, I love this. I am now issuing Jesus an invitaiton eat fried potatoes and go for a cruise on Sunday am. I think he'll go!

this is a wonderful post Tut-tut. I love the video
and the poem is brilliant

hope you have a great easter weekend

I enjoyed the video, it was peaceful to me for some reason. I do hope when you are done with the eggs that you will show them to us. Very interesting thing that they do.

Thank you for the poem.

oh for heaven's eggs, another post about eggs--is this some kind of THEME going on here?

cool you will be doing that this weekend?Please show it to us when you're done.
Also nice poem :)

Interesting poem. I don't think we'll be decorating any eggs but I am curious as to how yours will turn out. Take a photo.

Have fun egg decorating, and Happy Easter to you!
P.S. It's still wet and cold in New England at Eastertime, with flurries yesterday!

Fun! Are you doing pysanky decoration on your eggs?

lol. had to search google for what pysanky was... :D looks fun to do!

Loved the video - and the poem. I have never heard of psyanky, but I love anything egg-oriented - how will yours turn out, I wonder?

Wow, what a relaxing and interesting video "oh, my".

This made me remember the year that my German grandparents sent the kids to bed so they (the adults) could color eggs. My very docile mom was furious but didn't challenge the German side of the family.

The next day however she made sure that we had our own eggs to color. But not anything as intriciate as you have in The Easter Craft Book. Simply dunk and wait. :)

Have fun with the eggs!

I had to look it up, too! Interesting!

Interesting way to do eggs and an interesting poem.

tut-tut, I think my Grandmother may have done the psyanky eggs when she was little( being as she was from the Ukraine ). Alas, I can not ask her. I've a pic of nine of them posted, for to-day.

Happy Easter. And keep the bunny out of the garden!

Brilliant poem. Despite the fact that every year I dye some eggs I can't help but think that I would prefer them to be chocolate rather than hardboiled.

Thank you for the video and the poem. Great TT post...one of my favorite so far lol

I hear the twilight zone theme!

wonderful post... vid was magic and the poem, so right on.

thanks. look forward to seeing the results of saturday's art project!

Tut,
Thank you for the walk down memory lane. Are you going to decorate eggs Saturday? Don't do what Cronie did!!!LOL

Oh yes, please post your eggs. We used to decorate boiled eggs with wax and the purple from spanish onion peelings, very pretty. As for "he pauses extra hours so that they can further learn what we're made of" my brother in law is a plumber . . I swear he pauses when toilets are concerned!

Very informative post, I've always admired those eggs, but I didn't know how they were decorated.

Dr. John made you his blog of the day. Visiting through his link.

Decorating eggs is fun but I hadn't heard of the pysanky, much vancier than our eggs.

i love the poem. i ALWAYS love it when you TT guys use poetry in your posts! and the eggs are way cool as well!!

Those were the days. Decorating boiled eggs, so much better that just buying the ready made choc ones.

Had not heard of this way to decorate eggs. Looks like fun.

Thankyou for posting the poem. A good way to think about the season.

The poem is such a realistic way to look as Easter as it is for so many people. It's especially fitting for this period in our history.

Our eggs did not turn out so well this year. They were, however, quite tasty.

Cool - the pysanky tool reminds me of something I used when I did batik years ago. Wonder if they're the same tools? Thanks for the poem :-)