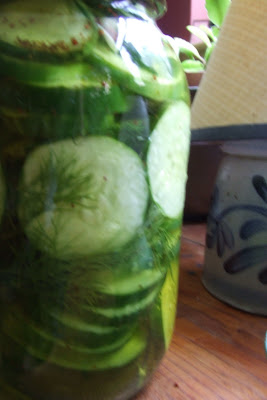 The library solves some book lust issues, but its budget is hacked yearly, and county commissioners here are anti-intellectual cretins who actually wondered why someone who wanted to read a book didn't just go to the bookstore and get one. Mother of god. Really.
Posted by tut-tut at 12:29 PM

tut-tut, this sounds great! Let's see...I've got the jars, sugar salt and fridge, just need everything else-LOL! This would hit the spot, about now( the stifling humidity is back )!

And sorry to hear about your library woes...

I've copied the recipe and will have to try this :) Are the cukes from your garden?

A former county supervisor here came into the library when I was volunteering there one day and actually asked whether there was still a need for books "since now we have the internet." I didn't know who he was and gave him a (polite) earful.

Now I am a county supervisor myself and find myself in the unenviable position of having to accede to budget cuts because we are having to choose between, say, library services and public health nurses. And roads. Sheesh.

"Stanford no longer requires parents earning less than $100,000 to pay tuition, and students from families earning below $60,000 get a free ride on all expenses, including room and board."

Harvard and Yale have a similar thing going too.

subby, cukes ARE from my garden. What a crop. Renee's Garden seeds rule.

@Kurt, considering "Ha-vad" has a 20+BILLION$$$ endowment....ya think? 'Course with all those investments gone sour, it could be a bit smaller...

tut-tut, huzzah! And the scanner worked better on my hands...er...

T, I don't have a lot of counter space in my little kitchen, but I am giving this recipe to my sister-in-law and bet your bottom dollar she'll make it. Yay!

Wow that sounds so easy and cucumbers are always cheap here, I swear they grow all year round.

Oh, this recipe came at the right time,Tut - zoikes have I got cukes! What to do about the dill, tho? Mine has up and died on me.

Great recipe and summery atmosphere! I love recipe books, too, but hardly ever make any of the things.. i now harvest recipes off the internet, and can spend hours getting lost in cyber food space! :)

And YES YES YES to purple haze vid. I watched it tonight as well. Wow.

Jimi was as cool as it gets, wasn't he?