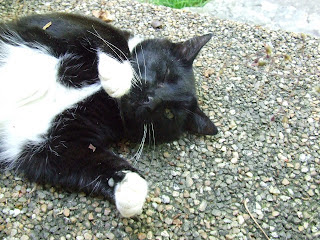 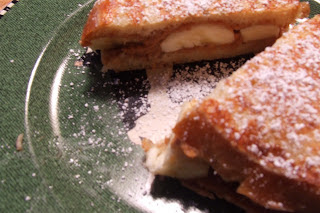 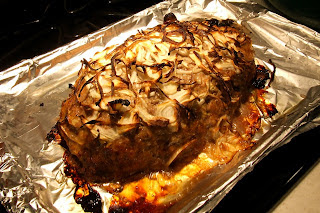 That meatloaf sure looks great. As for Martha? I always think her creativity and energy are just amazing and I feel inadequate, so inadequate by comparison.

Whoops; I did not make it clear that this meatloaf is an Everyday Food meatloaf idea; those crispy onions make the meal.

years ago I saw one of her shows--she featured a 'How to do laundry' segment and showed off her dog's dishes and water bowls. I never saw anything so boring in my life--I was in awe that this actually made it to television as instructional entertainment!

I want to do for moms what Martha did for entertaining.

And I want a bite of that sandwich.

Does Martha condone peanut butter :) I sometimes get ahold of old Martha magazines...do those still exist? I f only I had half her energy!

How on earth d'you manage to contrive to work from home? Do you mind my asking what you do... do you make a fulltime income? Does it all work easily?... Is it worthwhile? Can I do it..?

Many thanks for all your comments they are much appreciated... take care

Mutha: You would do MORE than Martha! Keep moving foward. The NYTimes article makes me realize how fast all this is moving, and you're already 3 steps ahead.

Gleds: I'm a copy editor; I'm sure you could do what I do. It does work out quite well.

Do you mean subbing other people's work to make it fit for whatever publication?

Yeah I could definitely do that. Also I could condense stuff down. You know for audiobooks/Reader's Digest Condensed Books/type stuff... I know I could do that but how would I go about getting the job with absolutely no experience?

I was thinking of abbreviating something already published and just sending my own condensed version in...

being as I CAN do it I at least have an appreciation of the skill required to edit other people's work... it can be quite challenging!

Gled, you usually take some kind of test, at least here. I work with college text books, but there is obviously all kinds of stuff out there to work on. I would call up/contact some publishers and offer to do some proofreading (find out what the going rate is first) to get my foot in the door. Or just do something on spec for a publisher whom you like; condense something, find out who the managing editor is, and send it to him/her. Good luck!!

I want a bite of that sandwich too.
And dare I admit that I have never seen a Martha programme?

MD: hit the link and you can see a portion of it.

Whatever happens, I will always love Martha. That peanut-banana French toast looks scrumptious. May I have a bite, pleeease?

Good luck with your crown work!