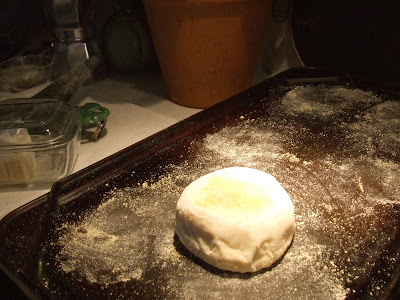 My New Year's Day attempt at English muffins, using a recipe from the old King Arthur cookbook. Looks as tho it's bathed in a holy light, doesn't it? But they came out rather rather chewy. Rather dense. I'm going back to the drawing board, so to say.

And, we are sticking our hand into the bagel batter. Yes, we have no bagels here in this part of the world, unless you count Lender's frozen, which I certainly don't. I went over to a recipe that Smitten Kitchen has (behold the beautiful photography; you won't see that here), and D stirred up the starter yesterday. He reached into the cupboard and pulled out a bag of high gluten bread flour AND barley malt syrup. Always at the ready . . . We shall see.

I never realized what a different culinary landscape the South is, until I moved here. Dearth of some things, only to be confronted with what I define as a conundrum, at least ten or so years ago: pulled pork, banana pudding, okra . . . who knew? Not me, that's for sure.
Posted by tut-tut at 1:49 AM

When I first saw the photo, I thought it was cheese. But I suppose you can't find cheese that looks like that in the South!

I can hear that ominus music they play for things like this. And I'm not sure how they'd hold up in shipping but we've got some great, ginormous( fresh )bagels to be had, just down the street from me :P The frozen kind just don't cut it( tho' the Ray's Bagels are about double the size of the Lender's ). And forget the bagged ones in the bread aisle...

I take it there is no bog town close with a bagel shop? I'm a notoriously poor baker, so I'm not sure I'd attempt either bagels or English muffins, but I admire you for trying.

I like chewy English muffins! I'll be glad to take that one off your hands.

Ooh muffins - it does look very atmospheric! I've always fancied trying a good range of Southern cooking, from my readings and watchings, the seafood sounds wonderful. And gumbo, of course.

home made english muffins I am IMPRESSED.

ah, there is much about southern cooking that I absolutely adore and although like with you not at all part of my heritage, I have incorporated many, many southern delights into our everyday foods.

few things thank bring as much comfort as fried okra, cheesy grits, pulled pork, and buttermilk pie - then there is the entire terrain of louisana cooking, oh crap, I feel the pounds piling up just thinking about all this food!

The south definitely does have its own cuisine. And yes your english muffin appears to be surrounded by a diffuse glow!

Oh. Frozen bagels? No. They are not bagels. They are frozen bread in the shape of a bagel.

No bagels here in Scandihoovian Heaven, either. Lots of cheese, though...

Funny what you miss when it's not available isn't it. I rarely eat vegemite but it's one of the things I crave when overseas for some reason. Anything involving yeast has me running a mile frankly! Not sure I fancy 'pulled pork' either whatever that is. I know they sell pigs brains in cans down there . . yuk! Although gumbo sounds fanbloodytastic.

have you ever made crumpets? they're a lot of fun to do (and to eat, of course)

That english muffin is almost HOLY looking.
I'd be too intimidated to try to make bagels...boiling and such!

Word on the street is you make some tasty stuff.

Well, the nuts & chews you sent got inhaled on Christmas Day, so I'm not scared to try anything you might come up with!