Will It Work This Time?

The other night I made a rather upmarket version of tuna noodle casserole, from (what else?) Everyday Food. I used that extremely expensive organic pasta you can buy at the whole foods store, direct from Italy and extruded through ancient brass dies (really! it says so on the box).

Anyway, it suddenly occurred to me that I might be able to make extruded organic pasta RIGHT IN MY OWN KITCHEN! 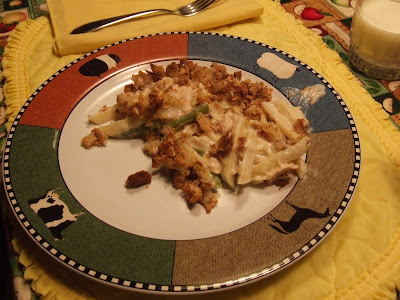 Waaaaay back in the 1980s in a mall in Natick (THE mall?), I made D buy this because it was on sale. I already had my Robot Coupe, which I had bought at the Eastfield Mall (where are all these specifics coming from?!) after receiving a rather large raise at work. 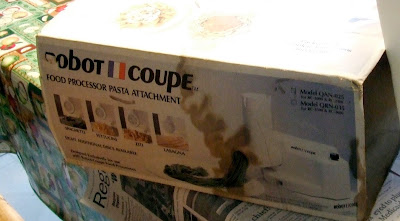 I believe I used it exactly once, after which it has sat on one shelf or another in its box wherever I happen to find myself. As I recall, the pasta I made was gluey and just plain no good. Since then, I've learned to make pasta by hand, with the well in the flour and the eggs and a rolling pin. But nothing tubular can come of this method, or at least not those that can hold their shape.

So . . . watch out, pasta attachment. Because I'm about to tame you, you rascal. 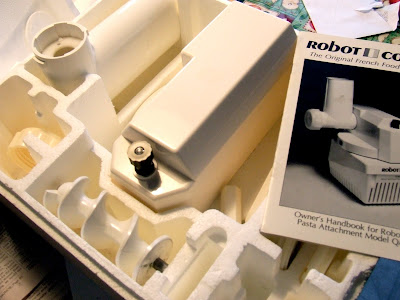 I'm exhausted thinking about making my own pasta...I'll continue to buy mine at the store. It's enough I actually have to cook it. I need a personal chef...

The kids bought me an Italian pasta maker years ago and I've only used it once,the flour is so expensive but there's something very special about making your own. Good luck!

my ma gave me a pasta maker, I used it exactly once in the 15 or so years that I had it, then years ago when emma when off on her own, I passed it to her....she uses it often (well often for me maybe 5 or 6 times a year).... kind of funny as she gave me her bread machine as she never used it and I use it about once a week!

hey do we have a scrabble game going on?

Good luck. Let us know if it works out!

I love tuna casserole. Love it!

Pictures of pasta make my mouth water, even at 10:30 in the morning! Good luck trying the homemade variety again -- material for another blog post!

i have a pasta maker i've used twice
:-[
shall watch here and hope you report back