were you in 1982? Last night I made tahini/garlic/yogurt/lemon/dill dressing from one of the many Moosewood cookbooks there are around. Instantly, I was transported to 1970 something or other and to the gentrifying mill/college town through the woods and across the river from my own snug dorm room.

This dressing is a grassroots hippiedom recipe. I used to make a similar one when I worked for a natural foods restaurant, adding tofu to it, churning it up in a giant industrial mixer so that the tofu became a grainy part of the putty-colored gloppiness. So satisfying poured on salad. What else, really, do you need? Maybe a cornmeal muffin . . .

Then of course I had to dig out my copy of Hilltown Cooking: Recipes from a Rural Food Cooperative, put out by the Shutesbury-Leverett Coop in 1982. A little self-published, spiralbound paperback. Predating the desktop computer for sure. The recipes were typed . . . on a TYPEWRITER. 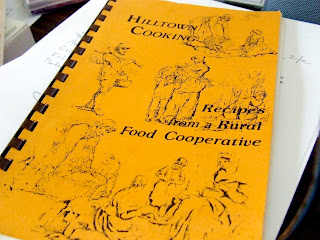 Lots of gluten, carob, and bulgur in here. Gluten Parmesan, anyone? Where are Judy and Raymond of Shutesbury, whose recipe this is, now? 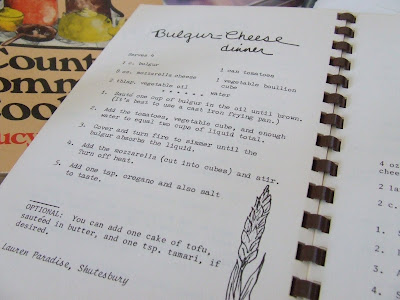 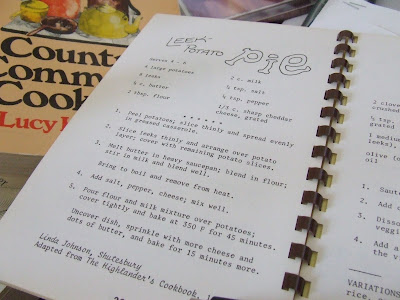 Perhaps you should follow JGH's lead, as I did, and track down a very entertaining book, Lucy Horton's Country Commune Cooking, which is Lucy's account of her 1971 odyssey around the country in search of communes and their best recipes. A well-written book, with some pretty good recipes too.

Maybe it's time to unleash your inner peripatetic 1970s yurt dwelling soul  .  . . but you may want to pass on the Nutritional Yeast Gravy.
Posted by tut-tut at 1:50 PM

I remember my mother having a Moosewood Cookbook back in the 80's, she had us all screaming for MEAT. Tasty stuff but no meat! *ooh leak and potato pie* (sorry I get distracted by food and shiny things)

There was a commune/Zen retreat in California that put out a lot of recipe books, too, but I can't recall the name at the moment. I learned to bake bread out of one of them. Ah! Tassajara! That was it. Yup, I learned to bake from The Tassajara Bread Book. Ah, the old days!

Roy, I have the Tasssajara Bread Book and I think my daughter used it to bake something during her January break. The spirit lives on.

We used the Coffee House Cookbook, from the UC Davis Coffee House. I worked there! The illustrations were great, but the recipes all called for margarine.