Yesterday, L voted. For the first time ever! in the local Republican primaries. In this state anyone can vote in a primary; you don't need to be a registered party member.

I was concerned to see how many little lawn signs were up for the contender for the seat held by our longtime moderate Republican county commissioner, but thought surely these were so numerous because he lives in this town. But so does our longtime moderate commissioner. The contender is pretty much a libertarian, who is an elder in the Presbyterian church, a self-described small businessman, who is a lawyer.

Hmm. When I opened the paper, the headline was, yes, "Contender Beats Incumbent"! We'll see what happens in the general election in August when he faces his opponent, an Independent (also Libertarian). This will have deep-seated ramifications for the new schools in the county and monies for such socialist notions as library funding and sidewalks, I would imagine.


Anyway, back to L; someone rang a bell to signify she was a new voter, and when she left, she was given this little symbol. Make of it what you will. 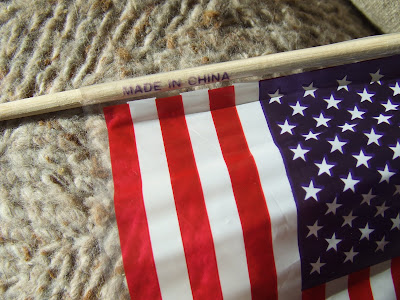 I don't get the American political system at all... its biggest downside seems to be that presidential elections involve campaigning for TWO YEARS ~ ridiculous!!

Here, it is the perogative of the party in power to decide when to call a general election ~ and they can announce one theoretically any time they like, there's no need to wait 4 or 5 years... Someone suggested we should change to the American system, where the entire era must run to an end before a new election happens, so everyone will know in advance when that will be. I'm totally against that idea, because it will result in that nonstop campaigning you get your end...

Our mighty general election is TOMORROW... when finally one month of intensive electioneering comes to an end and I seriously cannot wait! There is a chance BOTH the major parties will be effectively kicked out of power and we'll have a hung parliament, which means a coalition government, like they get in Germany

Whatever happens I'm sure it will be to the worst and I canot wait for it to be over (though something tells me I will end up following events half the night on television...)

PS another difference: if David Cameron's Conservatives get an outright win, he will be in power at 10 Downing Street from first thing Friday morning! No lengthy handover period. In he moves and poor Gordon and Sarah Brown have to call in emergency removals ;->...

Wow Gleds you're on a roll today!
I can't get over voting on a Thursday! Good on Ms L for turning up. Here it's compulsory and you're fined if you don't vote. No bells or flags though! Ah the irony .. everything's made in China!

You are right... everything is made in China. I try hard not to buy stuff made in China, but it's hard to find Canadian made.

it cool that L voted...we need to instill that in all to have their voices be heard...

fyi...your link on the tt site is busted...misspell on blogspot...

Wow...Everything in America is now made in China...This country is moving to the right, despite some moderate voices, and I am not thrilled as I don't see myself or others I know as represented in their agendas or platforms, but I do vote as I think it is still important...