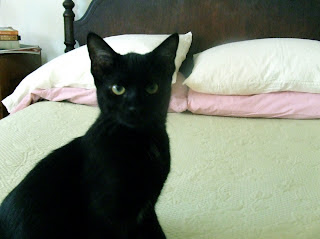 Today poor little kitty, who is just about 6 months to the day, went in for her shots and to be spayed. She's back, nodding in the sunlight, and very reluctant to be patted, even on her head. It's too bad—I really hated to put her through all that—but there are so many, many animals out there, unwanted. She herself was part of the litter of a feral cat, who was captured and spayed, before anyone realized this litter existed. She could no longer feed them, so B raised the kittens, feeding them with a bottle, and helping with all the bodily functions that the mother would have. This was an extremely taxing, especially given she was running her own shop, by herself, but all kittens were given away, and this one has an especially winning personality. Only cat lovers will understand this! 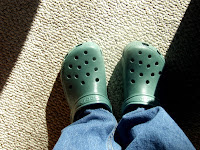 Other excitement: I also purchased a pair of these Crocs the other day, even though I swore they were too ugly EVER to wear and privately made fun of anyone I say wearing them (somone even came to my house wearing a pink dress and a pair of pink Crocs—someone who should have known better . . .). BUT they were on sale, so I tried them on. Like walking on the most comfortably padded surface ever. So, here they are.
Posted by tut-tut at 4:35 PM

AHA!
ahhaaaahahaha I say of the Crocs.
Ugly, yes, but there is nothing like them...and, if one dresses reasonably from the ankles up, there is no reason to scoff.

I tried a pr on yesterday mauve! But no matter what size I tried I just walked out of them....long narrow feet!

I wish you a fine week in your new Crocs (?):)
But where can you use them? They seems to be a full of holes, perhaps you keep them in warm rain there, water goes in and out !!! :-D

i wear them all year, with socks in the winter. granted, they'd be no good in snow, ,but otherwise...I like the color of yours.

and I wear mine with skirts. and pants. and shorts. pretty much anything. but then I am already a walking fashion disaster, so...