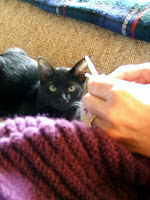 would like to knit along (or at least grab the wool and wrestle with it). She is recovering nicely from her spaying, though the day after she looked as though she would not recover and an unscheduled trip to the vet was necessary.

There, they took her temperature and whisked her away to an unknown surgery room, where she was hydrated subcutaneously (she had a kind of "bag" of water under her skin on her back; I had never heard of this) and was given some pain medication.

After she got home, she slept for several hours, and woke up much much better than she had that morning.

We lost power today; a tree fell on the lines, so unfortunately I was unable to work on the computer and so took up my needles instead. Also looked at Spin to Knit; I'm eager to begin learning.
Posted by tut-tut at 3:52 PM

So tell.....what are you knitting?

When you can put down the needles...you've been tagged!